This is Aquarus from the comics. For the TV show character, see Aquarus (TV). 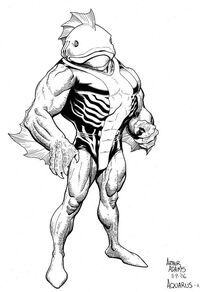 Aquarus was an original member of the Guardians of the Globe. They had worked with Omni-man but were betrayed and murdered by him.[1]

Years later, Mark touched a white light that put him back into his body at the time before he received his powers and with all of his memories. He attempted to talk to his father about not killing the Guardians of the Globe again.[2] Nolan became angry and immediately attacked Mark. Mark led him to Utah where he tricked Nolan into smashing into the Guardians of the Globe headquarters. He revealed Nolan's plans to the Guardians and they subdued Nolan. However, Aquarus was late to return home and only walked in on the wreckage afte the fight had completed. Cecil Stedmen soon arrived and agreed to bring Nolan back to the Pentagon and restrain him.[3]