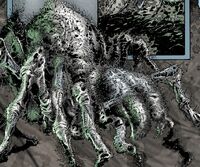 The Argus is an ever-changing demonic being. It has taken many different forms throughout the millennia. At one point it assumed the form of a giant cybernetic arachnid that ravaged the planet Pentagas-Fraser. The locals hired Angela to destroy it. While she could easily beat it, she became to cocky and became distracted when she saw Deurges, giving he Argus an opportunity to gain the upper hand on Angela.[1]

The appearance of the Kron threw a wrench in the Universe. A singularity was formed and Angela was teleported to different spots around the universe. When she returned to Limbo and battled Lilith, the Argus consumed Lilith.[2]