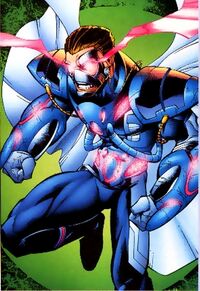 Aries is one of the twin kids (a boy and a girl) of Marc Slayton and Lynn Morinaka, albeit Marc didn't know that Lynn was pregnant when they parted ways. The boy was taken by Kaizen Gamorra, who experimented on him and artificially aged him, turning him into his right-hand man Aries.

Aries was first seen alongside Kaizen during the brainwashing of Cyberjack. [1]

When Marc went to Gamorra with the rest of Team 7, They faced Aries, and Jodi got surprised that he was a Gen-Active[2]. Jodi, Burnout and Aries, who had been taken prisoner, got separated from the others, but eventually reached Kaizen's fortress, where they reunited with the rest of Team 7 and Gen 13, and helped them against Ivana Baiul and her DV8, but Aries escaped during the fight.[3]

After Team 7, Gen 13 and the WildC.A.T.s were captured by Stormwatch, Backlash went to rescue them and got the sudden help of Union, who fought Aries and defeated him, but Aries escaped shortly after Marc learnt that he was his son. [4]

Retrieved from "https://imagecomics.fandom.com/wiki/Aries?oldid=68544"
Community content is available under CC-BY-SA unless otherwise noted.