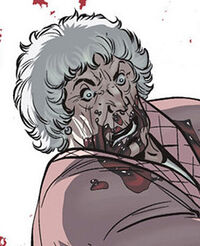 Arlene Dittman was on high-blood pressure meds and died of a heart attack. After coming back after Revival Day, she found she no longer needed them and continually lost her teeth.[1]

Arlene was found in barn after the death of a local horse. She unexpectedly turned on her daughter and murdered her in front of police officer Dana Cypress. She then turned and murdered Dana's sister, Em Cypress as well. She was ultimately put down by Em when Em returned to life as a fellow Reviver.[2]

While her body was examined in the morgue, Arlene Dittman suddenly came back to life again and escaped.[1]

Arlene was next spotted at the Wausau Hospital where she picked up a baby and called it Terry. She wandered off when hospital staff approached her. She then shocked everyone when she came in to Terry's funeral and was unaware she had killed her. She walked to crematory area and blew the place up by exposing wires to a high pressure fire.[3]

Her body was examined by Randy the Mortician again. He found that she had burned not only on the outside, but on the inside as well.[4]

Retrieved from "https://imagecomics.fandom.com/wiki/Arlene_Dittman_(Revival)?oldid=43135"
Community content is available under CC-BY-SA unless otherwise noted.