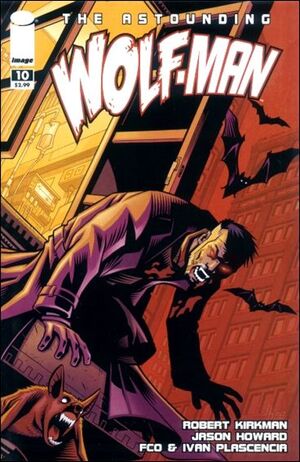 In another area, Agent Hunter is founded by his partner after having his legs separated from his torso. He directs him towards his legs so that he can reconnect his body.

Later in New York, The Actioneers attempt to find Gary since they are now vampires for Zechariah. Sergeant Superior asks where Zechariah is and Kinetic mentions that he disappeared. Across town in St. Mercy Hospital, Zechariah appears using his mist form before a sickly old man. The old man says that he has made mistake and asks that Zechariah turn him into a vampire, refusing it previously. Zechariah refuses and says that even if he were, he wouldn’t have much time anyway. He goes on to say that he is completely useless to him and the old man asks him to tell him a story. Zechariah reveals his origin in this said story. In the summer of 1916, around the time of the Great Depression, Zechariah would find a second wife after losing his first family to fever. He would start a new family with have a child on the way. Since money was scarce, he went to the city to find work. However, because he was old, he would be turned down when he offered assistance. Zechariah would be ambushed by a vampire at night, and knocked unconscious. Zechariah would regain consciousness and finds out that he is now a vampire. He would be filled with excitement since he was an avid reader of Bram Stroker’s Dracula.

Believing that a vampire nation existed, he would be disappointed to find out that they were addicts and a slave to their blood reliance. He would learn that they were stationed in an abandoned, run-down, house. The den mother of this group reveals that she had turned Zechariah into a vampire because he looked intelligient, asking for him to lead them. Zechariah refused and chose to escape instead. He would learn to use his power fairly quickly and return home. He would tell his wife that they needed to move since he had found a job and he would hide his vampirism from her for a long time.

His real purpose was to get blood and that he didn’t have a job. He would feed on criminals to sustain his life, feeling that they didn’t deserve to live. He would become the city’s guardian and his plan was to force the vampire nation into public, ruling the world. He goes on to say that they has had bumps, but is closer now than before. He apologizes to the man as he cannot be part of what happened. He asks Zechariah to kill him since he cannot be turn him into a vampire. He proceeds to strangle him until he successfully kills him. He apologizes, revealing that the sick man was his son from his wife. He declares his love for him and flies out of the hospital.

In Willow Creek, Gary begins to recover from his injuries and he sees Elder Brood standing over him. Elder Brood reveals that he cannot convert to human form anymore, stating that he lost it over time. He also gives him food and says that his new trial is to urvive the few days he needs to recover. He leaves, hoping to see that he is worthy.

Retrieved from "https://imagecomics.fandom.com/wiki/Astounding_Wolf-Man_Vol_1_10?oldid=60566"
Community content is available under CC-BY-SA unless otherwise noted.