"The Astounding Wolf-Man vs. Invincible! Part 2 of 2" 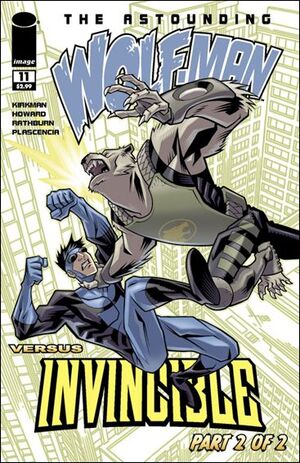 Appearing in "The Astounding Wolf-Man vs. Invincible! Part 2 of 2"

Plot Synopsis for "The Astounding Wolf-Man vs. Invincible! Part 2 of 2"

Gary and Mark argue that he didn’t kill his wife. Cecil Stedman argues that the jury can listen to his story. They continue fighting the Reanimen surrounding them and begins to realize that they will be overwhelmed soon. He grabs his underarms and flies out of the Pentagon. They are attacked by the Guardians of the Globe while attempting to escape. The Immortal leads charge and says that Mark is in big trouble for protecting a murder. Mark notes that he keeps “odd company.” Darkwing argues that Mark has killed people too.

The duo commence fighting with the Guardians and Gary manages to dodge a punch from Black Samson. Mark lands on Immortal and Shapesmith ambushes him. Mark strikes back. Darkwing would attempt to bring Gary into the Shadowverse, but Mark grabs him, only to be ambushed by Immortal. Mark becomes angry and says that he is sick of holding back. Mark flies towards Immortal and grabs his head. He would swing his body and knocks out the entire Guardians team. He throws Immortal and leaves with Gary. Gary apologizes and Mark argues that Cecil will likely need him since he is most likely the strongest hero on the planet since Nolan left.

Mark takes him to the Hampton Estate where he would tell the story of how his daughter saw his holding his wife’s body, making her believe that he killed her.[1] Gary remarks that he will find Zechariah and kill him. Dunford interrupts and Gary introduces him to Mark. Dunford reveals that Chloe’s grades have dropped since the incident and she hasn’t opened up to Gary. Gary remarks that he should have listened to Dunford about Zechariah, Dunford remarks that he wasn’t his fault. Gary promises to make things right with his daughter and he asks Mark to take him back to Willow Creek. Mark leaves, stating that his girlfriend is probably wondering why he hasn’t come home yet. Elder Brood asks who Mark is and Gary remarks that he is a friend.

Cecil finds a location on Gary and Agent Hunter asks if he wants him to go in. Cecil says no, stating that he will be kept under surveillance and that he may have use for him.

Retrieved from "https://imagecomics.fandom.com/wiki/Astounding_Wolf-Man_Vol_1_11?oldid=60567"
Community content is available under CC-BY-SA unless otherwise noted.