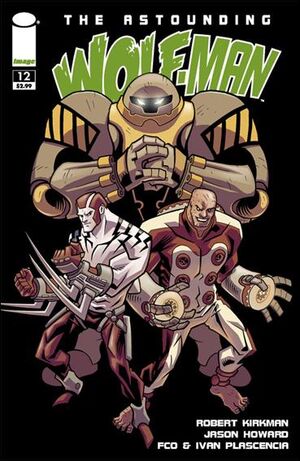 Eruptor, Thrill Kill, and Construct are being transported to Stronghold Penitentiary. Construct summons her armor and causes the truck to stop, breaking the trio of their restraints. She showcases her Genius Level Intellect by doing so and asks the duo to come with her to her hideout.

Later in Montana, a few days have passed as Gary continues his training with the Elder Brood. He notices that he is holding back and Elder Brood calls off their training. He says that he will not be welcome there after he leaves the forest and demands that he never return, much to Gary’s confusion.

The trio arrive at their location and Thrill Kill decides to take over the location. He slits Eruptor’s throat and heads to Construct. Eruptor fires him with a lava blast, revealing that it takes more than having his slit to kill him. Constructs argues that he didn’t save her and asks Thrill Kill to attack her. He does, only to have his steel claws destroyed. She reveals that any attack would be countered by a laser array in the safehouse. She asks them to work with her, going by the name, “Triple Threat.”

Gary heads back home on a pickup truck while Zechariah talks with Chloe Hampton. Zechariah suggest that she lure Gary to him so that he can kill him. Chloe refuses and asks that Zechariah trains him. He accepts.

Thrill Kill and Eruptor prepare for deployment after learning where Gary is. The duo are impressed that Construct was able to recreate their costumes, showcasing her Genius Level Intellect.

Gary heads back to his old lair and Cecil Stedman appears before him. Gary converts to Wolf form, believing that he was there to arrest him. Cecil argues that he believes him and he can help Gary, but only off the record. He goes on to say that if he’s caught, he cannot help him further. He begins to cry as this was the site that his wife was killed.[1]

The Triple Threat arrive in Montana to commence their attack on Gary, not knowing that he’s in New York. Gary goes back to his wife’s gravestone and apologizes for getting her mixed up in his mess. The Triple Threat begins laying waste to the forest in an effort to get his attention. However, they realize that they get the attention of Elder Brood, much to their shock.

Gary begins to cry at her gravestone and stays there until the sun rises up. Agent Hunter interrupts after revealing that he had planned this all along and says that he is under arrest.

Retrieved from "https://imagecomics.fandom.com/wiki/Astounding_Wolf-Man_Vol_1_12?oldid=52192"
Community content is available under CC-BY-SA unless otherwise noted.