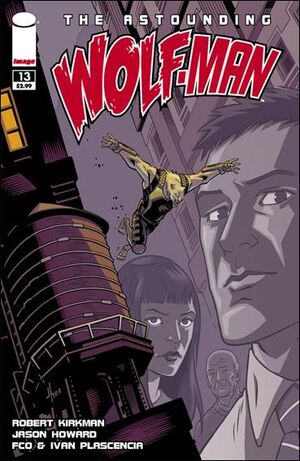 An angry Gary demands to know why Agent Hunter came there. Hunter argues that it was a killer’s style to go back to the crime scene. Believing that Gary can’t do much about fighting in human form, he prepares to arrest him. Gary remembers the training he received from Elder Brood and was trained in case he had to fight in daytime. He disarms Hunter and attempts to run. Hunter easily catches up to him and he fires a bullet at him. Hunter dodges it and manages to subdue Gary. Hunter remarks that a jury will find him guilty and comments that “he’ll be joining” Rebecca soon. In Montana, Construct, Thrill Kill, and Eruptor were easily defeated by Elder Brood, showcasing his superior strength and fighting skills.

At the Hampton Estate, Dunford wakes up Chloe. He notices that Chloe has been sneaking out and has scars on her arm. An angry Chloe tells him to shut up and says that she doesn’t have a father. An angry Dunford defends Gary and Chloe slaps him. Dunford reveals part of Gary’s origin.

At age 19, Gary owned a small record store and turned it into a record company from two artists that were turned down by others. Their song would be a hit and appear in a famous movie. Around that time, he would start dating Rebecca. From there, he would make millions of dollars.

An angry Chloe demands to know why he’s telling her about it. Dunford argues that she has been treating him strangely over time. She lets him continues.

The two artists decide to retire while Gary decided to go bigger. He invested in a software company and in telecommunications as he expanded. With his knowledge on economics, he would be a billionaire in just six years. Around that time, he married Rebecca and had Chloe. As he started growing wealthier, he would be more charitable with building hospitals, schools, shelters, and other establishments. Dunford goes to say that Gary saved his life by buying his company as Gary’s company was putting him out of business. He offered him a position, but Dunford would retire instead. After Dunford’s wife died, Gary would offer him a position as a manager of the estate.

Though Gary and Rebecca were married, Gary would spend many nights away from work. The lonileness overwhelmed her and she had an affair with a company competitor, Nathan Singleton. While the affair happened, she had revealed company plans to Singleton, but Gary was more upset at her betrayal than her exposing secrets. In order to help through it, Gary would take the family to Montana where the Elder Brood would be watching him.

Dunford argues that after becoming a werewolf, he would try to help people, defending him from his accusations. Chloe goes to say that it was Gary that killed her mother, but the Wolf form that did. Dunford gets a call to learn that Gary has been arrested and now in prison.

Cecil arrives before Gary and says reprimands Gary for going to an obvious place that would lead to capture. Cecil says that he will find Zechariah while he serves out his sentence. Over the few months, Gary’s trial would be found guilty and sentenced to Stronghold Penitentiary.

At Zechariah’s house, Zechariah and Chloe train with one another. Zechariah notes that Chloe has improved and that they can kill Gary as Stronghold Penitentiary. He notices that Chloe gets tired easily and she begins to start drinking Zechariah’s blood from a flesh wound.

Retrieved from "https://imagecomics.fandom.com/wiki/Astounding_Wolf-Man_Vol_1_13?oldid=42994"
Community content is available under CC-BY-SA unless otherwise noted.