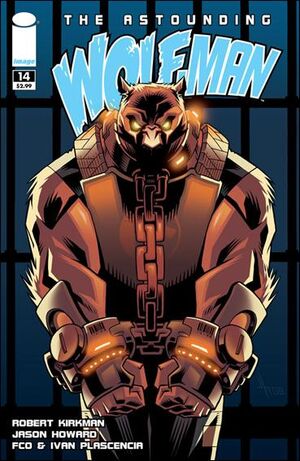 Gary is transported with Construct, Thrill Kill, and Eruptor to Stronghold Penitentiary. Gary ignores their remarks as he is checked in. Thrill Kill breaks free of his restraints and attempts to kill Gary. He slashes through a prison guard, but is brought down. The guards start beating on Gary and they argue that Brad would be alive that if it weren’t for him. Over the few days in solitary confinement, a guard comes to him and asks that he come with him. He is brought to an inmate. The clouded person thanks the guard who’s name is revealed to be Anderson for bringing Gary there. He asks one of his bodyguards to remove two of Anderson’s fingers for punishment of an act he did. The shrouded man asks for Gary’s help in getting him a plane to escape. Gary refuses and says that he will take his chances in the prison.

At Zechariah’s House, Zechariah has Chloe drink more of his blood to get Vampire powers. Chloe asks that he turn her into a vampire, but he refuses. Zechariah reveals that though drinking his blood gives her temporary powers, she says that it’s more than enough. He argues that she doesn’t know the burden of being one. Chloe attacks him and asks if she “doesn’t give him a choice.” Zechariah goes into mist form and reminds her to know her place.

Dunford goes to visit Gary in Stronghold. He reveals that Chloe is missing and that the police are involved now. An angry Gary demands that he find her while he’s being taken away.

Zechariah continues arguing with Chloe and Zechariah assures her that he has a plan. He looks back as he plans to use the Actioneers to assist them. Several guards arrive before Gary and demand that Gary see the Face, the man in the shroud or they will beat them. He complies and go to the Face. He offers his assistance and Face asks that his power inhibiting collar be removed. The collar is removed, but they forget to realize that he’s having a feral frenzy.

Retrieved from "https://imagecomics.fandom.com/wiki/Astounding_Wolf-Man_Vol_1_14?oldid=61511"
Community content is available under CC-BY-SA unless otherwise noted.