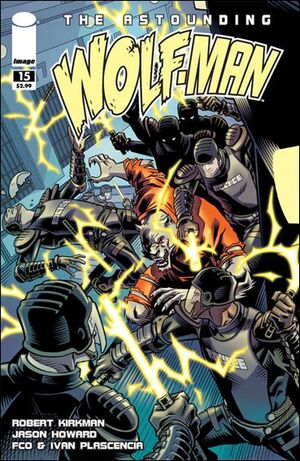 Gary begins killing more guards in his feral state and Face takes off his cowl, revealing his three eyes and two mouths. Face blasts him with an eyebeam, but he gets up again. He charges towards Face, but he is eventually stopped by guards. The warden yells in anger as they had a deal to keep the peace and warns him that his privileges would be revoked if it happens again. Face argues that he knows about the warden’s corruption. The warden asks that they take him to his cell.

Gary wakes up, remembering that he was in a full moon rage. He begins to believe the collar inhibiting the full moon frenzy and only postponing it from happening, the reason why he had it on a normal day. Face goes to say goodbye and Gary argues that his full moon frenzy caused him to do. He manages to convince Face to let him back on.

However, the one of the Alternate Mark Graysons attacks Stronghold.[1] He was knocked back and the battle would go on for hours. He uses the convert to Wolf form. He stops Thrill Kill who’s attempted to escape. The building collapsing gave Powerplex enough kinetic energy to attack Gary and escape. Gary would be transported back and then the Face says that the plan is setback but must be done. It is revealed that Gary has informed Cecil of the plan and Cecil wants him to act as an undercover agent. Gary is given a false inhibiting collar so that he can revert to Wolf form. Cecil reveals that he was in that prison before [2] and that he will help get him out.

Meanwhile at Zechariah’s House, Mecha-Maid sees that the Actioneers have left and uses the chance to escape. Sergeant Superior emerges into Gary’s cell, and grabs him. He doesn’t recognize him and throws him aside. Minotaur begins battling a few guards and Gary uses the chance to run. He arrives to inmates threatening to kill him. He converts to Wolf form with Code Blue and Kinetic. While Code Blue goes to feed on inmates, Kinetic flies Gary out and brings him to Zechariah. Zechariah comments that he knows Gary has waiting a long time for this and Gary comments “you have no idea.”

Retrieved from "https://imagecomics.fandom.com/wiki/Astounding_Wolf-Man_Vol_1_15?oldid=61514"
Community content is available under CC-BY-SA unless otherwise noted.