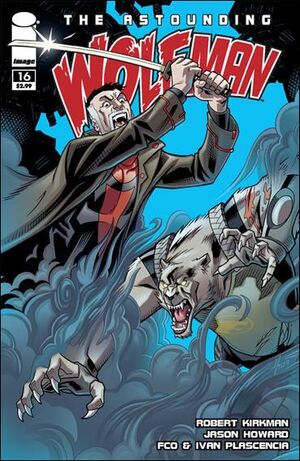 An angry Gary immediately attacks Zechariah, remembering that he killed his wife.[1] He remembers what Elder Brood told him about Zechariah have more speed than him and that he let him be fooled in a false sense of superiority. While they fight, Minotaur and Code Blue continue to slay prisoners satisfy their vampirism. Construct and Face use the distraction to their advantage.

Zechariah notices that Gary has improved, but says that it won’t matter. Zechariah goes into mist form and Gary remembers his training with Elder Brood. Elder Brood tells him that the form has its disadvantages. Gary begins in inhaling the mist so that he can’t escape. Zechariah rematerializes and Gary bites his hand off. Zechariah screams in pain and the blood loss begins to weaken him.

Their invasion catches the attention of Capes, Inc and begin fighting. A surprised Bolt is shocked to see his friend, Kinetic to be a vampire. Zechariah continues battling Gary and Zechariah notices that he’s been getting help from someone. Mecha-Maid sees the battle, ashamed of what’s happening. Zechariah puts the hint in and realizes that Elder Brood had trained him. Gary grabs a wooden stake and stabs him in his chest.

Gary remembers what Elder Brood told him about how the stake through the heart isn’t effective, but the stake would keep him bind so that sunlight can incinerate him. A dying Zechariah says that Gary has doomed them as the Elder Brood only trained him to be a servant. Chloe emerges attempting to kill Gary. Gary doesn’t want to fight and she tackles him. He attempts to explain to her and he realizes that she was with Zechariah the whole time she was missing.[2] He argues that Zechariah killed her and uses Zechariah attempting to kill him as proof. He goes to say that he misses Rebecca as Chloe does to. Chloe gives him a false sense of security and impales him with her sword.

Retrieved from "https://imagecomics.fandom.com/wiki/Astounding_Wolf-Man_Vol_1_16?oldid=42997"
Community content is available under CC-BY-SA unless otherwise noted.