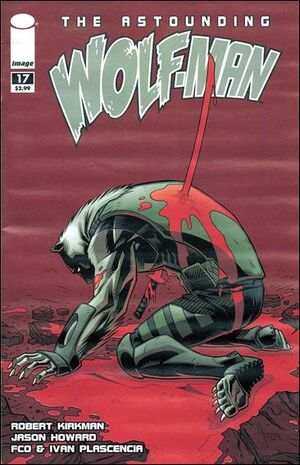 Chloe begins to panic at the sight of Gary Hampton bleeding to death. He pulls the sword impaled into him and says that he won’t fight Chloe. He holds up her sword and passes out. Chloe apologizes for believing Zechariah over him and begins to cry. Gary uses the training he learned from Elder Brood and converts to Human form before he loses consciousness.[1] Thrill Kill and Kursk see the duo and begin to attack her. She dodges Kursk’s bolt with ease, but shocked Thrill Kill and her at the same time with a second bolt. Gary reverts to Wolf form and assist Chloe. Thrill Kill and Kursk are easily beaten by Chloe. While the Actioneers are fighting Capes, Inc, Face, Construct, and Eruptor contemplate escape. Face attacks an emerging Captain Cosmic and the trio attempt escape.

Gary tells Chloe about having to leave her to go undercover and Chloe acknowledges so. She hugs him one last time and tells him that she loves him. Capes manages to subdue the Actioneers and asks for someone get Cecil to transport them. Mecha-Maid is shot down by Face and Eruptor attempts to destroy her. Gary stops her before he does. Eruptor attempts to kill him instead, but Face advises her against it. Gary defends Mecha-Maid and lies about her role and helping with the breakout. Construct obeys and arrives with her Construct armor to transport them. Cecil appears before Zechariah and says that he knows about him murderering Rebecca. An airtight chamber is prepared so that he can be transported. Chloe is pulled out from the crowd, but Cecil asks that she be released.

In one of Construct’s safehouses, Mecha-Maid wakes up from the attack from Face. Face asks for Gary’s help in getting him a private plane as Construct’s drone isn’t a legitimate aircraft, making it possible to start a war. Face says no one knows of the location. However he doesn’t know that a werewolf is watching them and reporting to its superior.

Retrieved from "https://imagecomics.fandom.com/wiki/Astounding_Wolf-Man_Vol_1_17?oldid=51477"
Community content is available under CC-BY-SA unless otherwise noted.