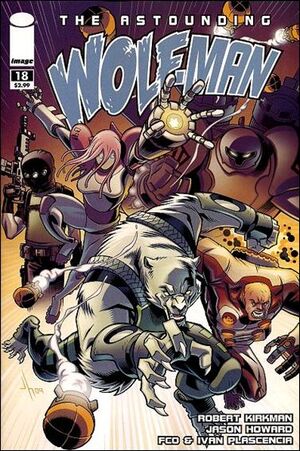 In The Pentagon, Donald Ferguson goes to comfort Chloe Hampton. Donald goes on to say Chloe made a mistake and she didn’t push over. Chloe thanks him and kisses him on the lip, much to his shock. A confused Donald mentions that he’s a robot and married. He apologizes as he read her emotions wrong. He offers her a lift home.

In Construct’s safehouse, Gary Hampton looks in amazement after Construct was able to replicate Gary’s “Wolf-Man” costume. Construct reveals her Genius Level Intellect and reveals that the moonlight gauntlets should work now. An entire night is supposed to be give him two hours of daylight. Face asks Gary if he has been able to reach his contact. Gary reveals that the plane is ready.

Back at the Pentagon, Agent Hunter questions Cecil on why he let Chloe Hampton. Cecil says that he appreciates him being a dedicated agent, but says that the Wolf Man investigation is over. He goes to visit Zechariah and reveals that after taking a mold of his teeth, he found out that Zechariah did it. Zechariah argues that they are more things at stake and he shouldn’t be kept there. Cecil says that he will be charged for Rebecca Hampton’s death.

In New York at the Hampton Estate, Donald drops off Chloe and she goes to see Dunford. She apologizes to Dunford for what happened and Cecil emerges with news of Gary not killing Rebecca.

In Construct’s safehouse, Face asks that Gary make the final preparations and he is ambushed by a werewolf. He calls him a betrayer, stating that he can be ruling humans. They battle briefly so that he is placed on the edge of the canyon. Mecha Maid holds on them and the werewolf reveals that he’s with Cecil. Gary complies and the werewolf thanks him for saving his life before. He drops and uses the side of the mountain to soften his fall.

At the Hampton Estate, Chloe cries after realizing that she made a mistake. Dunford comforts her and says that he has forgiven her already.

Gary and the villains arrive in Miami, Florida at a private airstrip. Face warns Gary that he will kill him if he goes out of control again and will kill his daughter too.

At the Pentagon, Agent Hunter watches over the quartintined Actioneers who are in intense pain from not being fed blood. Donald enters and wonders what he will do with him.

Cecil speaks to Gary over the earpiece and informs him that he knows where he’s going: The United Kingdom. He asks that Gary try to stop the Face from achieving his goal. Elder Brood smells Gary on the plane in Montana and says that it is almost time.

Retrieved from "https://imagecomics.fandom.com/wiki/Astounding_Wolf-Man_Vol_1_18?oldid=61517"
Community content is available under CC-BY-SA unless otherwise noted.