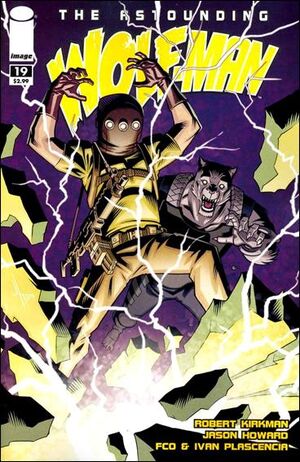 At the Stonehenge Monument, Face talks with Gary about how he can hear with his two brains, showing his Enhanced Brain Capacity. He reveals his plans to summon a creature to get under his control. Cecil Stedman reveals that he knows about it and tells Gary to stand by. He asks Construct to push a rock over three inches. He asks Eruptor and Mecha-Maid to knock over a rock. A large rock like being emerges, calling itself Gorgg. Face calls him the “Great One” and Gorgg grabs him. He thanks Face for freeing him, but says that he has no use for him. He throws him in his mouth and

Eruptor and Construct uses the opportunity to escape. Mecha-Maid converts herself into a jet pack and Gary heads for Gorgg. He lands a blow, but it has no effect on him. Mecha Maid forms on more of his body and he manages to land a blow. He starts going underwater and notices the lunar gauntlets actually work for him. He sees Gorgg arrive in Manhattan and he reveals that he plans to kill the descendants of those who imprisoned him. Gary says that he won’t allow it to happen and Mecha disconnects so that she can save passengers. She uses her robotics to enhance Gary’s strength and he uses the disconnected bridge cords wraps around Gorgg’s arms and head. He reaches for Gary, but his own strength severs his own head. Gary emerges from the wonder to cheers of people.

Retrieved from "https://imagecomics.fandom.com/wiki/Astounding_Wolf-Man_Vol_1_19?oldid=43000"
Community content is available under CC-BY-SA unless otherwise noted.