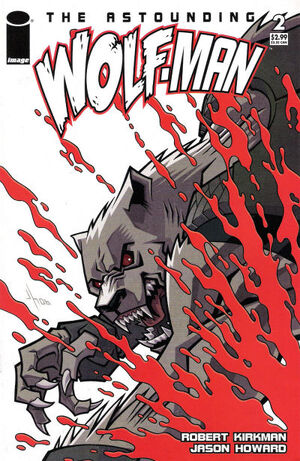 Gary Hampton and the man continue their training. The man mentions that Gary has been improving as they have been training for weeks. Gary says he has been able to control his transformations, but not the strength he has. He also mentions about how his wife doesn’t trust him. The man, who’s name is revealed to be Zechariah, says that he can use an ally. Gary asks how doesn’t he get blood since vampires need it. Zechariah reveals that he doesn’t always drink human blood, sometimes animals. This reliefs Gary and Zechariah calls Gary “lucky,” as his lycanthropy gives him super-strength, speed, stamina, agility, enhanced senses, as well as accelerated healing when he reverts back and forth through transformations. Zechariah tells Gary that they must leave as the sun is coming up.

Back at the Hampton Estate, Gary arrives home to his wife, Rebecca Hampton. Rebecca argues that Gary’s appearances can make people find out about his lycanthropy. Gary reveals that his lycanthropy has allow him to stay awake and that it helps him save people.

He leaves to go to Dunford to see the construction of his Wolf-Man headquarters disguised as a mall. Dunford argues that Gary is putting too much faith into Zechariah as he doesn’t know him. Gary argues that Dunford is getting his points from Rebecca as she doesn’t trust him either.

The next night, Gary saves two children from the fire. Though initially scared of him, Gary assures them that he isn’t there to hurt them. He heads back up and sees Zechariah on the building. Zechariah reveals that his mist form allows him to travel much easier. Gary believes that he was recorded and Zechariah says that he must look the part to be a superhero.

Days Later, Zechariah and Gary go to Art Rosenbaum’s shop and he is given a costume. The costume includes a bulletproof vest and spandex pants along with gauntlets. Art goes on to say that the name they called him on the news “Wolf-Man” inspired him to create the costume. This gives Gary inspiration though he initially disagreed with it. Later, Gary asks what the gauntlets are for and Zechariah reveals that they store moonlight so that he can stay outside in daylight. They are interrupted by a battle taking place between the Actioneers and Spore fighting them. Gary offers his aid to the Actioneers who introduce themselves. As Spore begins multiplying, Kinetic ask that Sergeant Superior charge into Spore. They attach to him, causing him much pain. She asks Minotaur to take care of Superior and Gary heads for Spore. A confused Mecha-Maid and Code Blue wonder who he is. Gary manages to tear him apart with ease with Kinetic in amazement. Superior grabs his head and Mecha Maid puts him in a containment pod. The five of them look around for Gary, but he had disappeared.

The next night, Gary heads home and says goodnight to his daughter, Chloe Hampton. He asks for Rebecca and she appears before him in sexy sleepwear. The duo begin to become intimate but are interrupted by Gary’s full moon frenzy. He jumps around the city and notices Sergeant Superior. He greets Gary, not knowing that he is on a frenzy. Gary attacks Superior, seemingly killing Superior

Retrieved from "https://imagecomics.fandom.com/wiki/Astounding_Wolf-Man_Vol_1_2?oldid=50903"
Community content is available under CC-BY-SA unless otherwise noted.