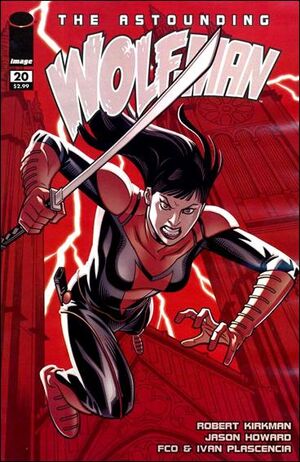 Patricia Thomas discusses on the air about what has happened with Gary Hampton following his company troubles, his wife’s murder, and his wrongful conviction. Gary waits backstage with Dunford thanking him for being there for him. Gary says that he remembers what happens and how he can’t stop thinking of her. Gary is called in to do the interview and Chloe Hampton sees it at Mecha-Maid’s house. Chloe asks her to turn it off and she asks him to call her “Pamela.” He goes to touch Elise and she sees that she isn’t real. Mecha Maid reveals that she is so complex, that it is almost as if she is real and that she created her from her programming.

Gary goes back to visit his old lair disguised as a mall. Cecil reveals that he can have the facility again. He asks why he let Zechariah live and Cecil argues that clearing his name. Gary acknowledges the case and he asks about a werewolf saving his life. Cecil says that it will be revealed in due time.

In Manhattan, construction workers begin rebuilding the bridge and moving the rocks from Gorgg. One opens one and Face asks to be taken to prison. Another team begins moving the rock under and a scuba diver is killed mysteriously.

Later that night, Chloe and Gary go out patrolling with Chloe driving. Chloe complains as she only has her driver’s permit. A silhouette figures watches over them and emerges from the shadows. It is revealed that Mecha Maid had worked on the car and enhanced its capabilities. Impact arrives in and uses the crash to enhance his power.

Chloe launches Gary, but it only gives Impact more kinetic energy. Impact blames Gary for sending him back to the scientists and how he has a wife and daughter. Chloe morphs the car into a drone and punches him. The kinetic energy only empowers him and he knocks over the car construct. Chloe emerges with the alias “Vampire Girl” and Chloe attempts to attack. Impact calms down and Cecil emerges with Bulletproof and Black Samson. Impact goes with Cecil and says that they can accomplish something.

Mecha Maid visits the Actioneers at the Pentagon. She attempts to get through them, but says Kinetic keeps begging for blood. She goes to see Zechariah and asks for his help in reverting back to humans. Zechariah tells her that something can be arranged.

Retrieved from "https://imagecomics.fandom.com/wiki/Astounding_Wolf-Man_Vol_1_20?oldid=51646"
Community content is available under CC-BY-SA unless otherwise noted.