"Legacy, Part One of Five" 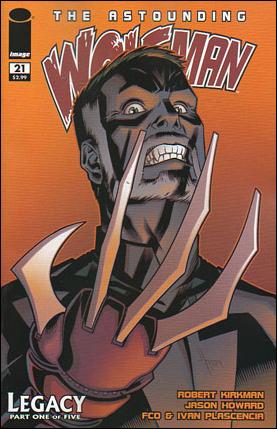 Appearing in "Legacy, Part One of Five"

Plot Synopsis for "Legacy, Part One of Five"

Impact tells some of his origin story. He reveals that he had volunteered for so that he could feed his pregnant wife and when he wanted to go back home, Doctor Kleaver refused to let him go. Impact thanks the group for helping him. A team consisting of Mecha-Maid, Agent Hunter, Donald, Chloe, Gary, and the werewolf. Impact directs them towards the right place and Doctor Kleaver emerges with 5 other experiments: numbers 7-13.

In a forest, Jacobson smells the Elder Brood. Jacobson’s son quivers in fear as many of them are afraid of the Elder. He bows to him and Elder Brood asks that Jacobson gather all the werewolf tribes, noting that it is “time.”

At the Pentagon, two GDA guards notices that Zechariah has escaped. He uses his mist form to escape through an air vent.

The six of them continue their battle with the experiment. Cecil emerges from the teleporter. He reveals that he will take over the company Soldiertech. He arrests Doctor Kleaver for performing illegal experiments and says that the men that volunteered will be compensated for their work. Cecil then reunites Impact with his wife and daughter, much to his happiness. Cecil tells the group to go on the plane.

Gary talks with the werewolf and he reveals that he had saved his life. The man, going by the name “Gray Wolf”, says that he was the man on the roof Gary had attacked on his full moon frenzy.[1] Gary thanks him as he had believed that he had killed Gray Wolf. They land and Gary remarks that Chloe still needs to finish school.

Mecha Maid arrives to an undisclosed location and meets Zechariah there. She gives him an artificial hand to compensate for the one he lost.[2] Zechariah asks why she helping him. She reveals that the Actioneers matter to him and will do anything to revert them back. Gary goes to put Chloe to bed and leaves Dunford to the theater room. Mecha-Maid arrives and Gary converts to Wolf form, noting that Zechariah’s scent is on him.

She reveals that she freed Zechariah and Gary says that he doesn’t care about what happens to his image and that Zechariah must die.

Retrieved from "https://imagecomics.fandom.com/wiki/Astounding_Wolf-Man_Vol_1_21?oldid=68285"
Community content is available under CC-BY-SA unless otherwise noted.