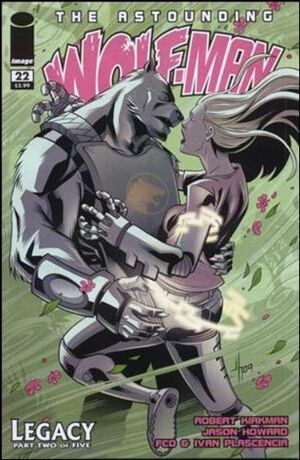 Elder Brood gathers all the werewolves into one place and prepares them for a ritual known as The Gathering. The werewolves cheer on.

In New York, Construt is followed by Gary and he attempts to subdue her. Chloe emerges with and cuts open the drone, leaving her defenseless.

In Wolf Man’s Lair, Mecha-Maid and Donald argue over Elise. Donald argues that Elise has a right to live on and says its close to child endangerment. An angry Mecha Maid argues that she’s protecting her and that he doesn’t understand. Donald reveals his cybernetic body and she tells him to leave. Gary and Chloe arrive and Donald explains. Donald argues that speaking with Elise and she says that she’s unhappy with being shut down all the time. Gary defends what Donald’s saying, but they are interrupted by Zechariah calling Mecha-Maid.

Gary remains in the shadows and launches a surprise attack. However, Zechariah knew that he was coming and disabled the fail safe in his launchable hand. This showcases his Genius Level Intellect. Zechariah attempts to escape and is successful by turning into a bat.

The duo head back to the Hampton Estate and contemplate what to do. They are ambushed by Jacobson and his werewolves. Jacobson reveals that he must kill everyone he knows since he had been marked by the Elder. Dunford emerges and has his throat slit by a werewolf claw, much to Gary’s horror.

Retrieved from "https://imagecomics.fandom.com/wiki/Astounding_Wolf-Man_Vol_1_22?oldid=46861"
Community content is available under CC-BY-SA unless otherwise noted.