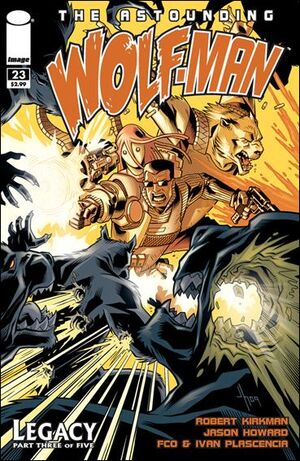 While Mecha-Maid keeps firing into werewolves, Gary cries in grief of the death of his friend, Dunford. Jacobson tackles him and says that he must die as he has been marked by the Elder Brood. Jacobson doesn’t question the Elder, showcasing his fear of him. Chloe emerges and manages to kill one. Agent Hunter and Gray Wolf arrive to the battle, but the plan backfires as the werewolves go back in the teleporter. The group begin to get overwhelmed as Agent Hunter loses his hand. Mecha Maid bonds herself with Agent Hunter and he keeps firing. Jacobson and his pack retreat. Agent Hunter asks if they should pursue, but Gary says to let them go. The group assess the damage while Agent Hunter rettaches his hand.

Later, they attend Dunford’s funeral and Gary places a rose on his grave. Gary goes to the Pentagon and contemplates quitting being Wolf-Man. Cecil argues that him quitting means that he has given up for his wife’s sake. Gary agrees after an outburst of anger at first. At the Estate, Mecha Maid finally gives Elise a body of her own.

Meanwhile at a port in Manhattan, Damien Darkblood is called by a police officer about the Gorgg incident.[1] He asks Damien to use magic, but he says that he doesn’t have any. He reveals that he has strength slighty higher than the average human, heat resistance, and detective skills. Under the sea are miniature Gorggs.

Gary and Chloe retire for the evening and Zechariah kidnaps Chloe. Gary continues chasing them until he is attacked by Elder Brood, stating that he is to be tested.

Retrieved from "https://imagecomics.fandom.com/wiki/Astounding_Wolf-Man_Vol_1_23?oldid=67445"
Community content is available under CC-BY-SA unless otherwise noted.