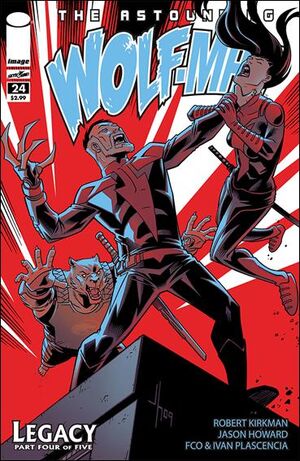 Elder Brood reveals that he allowed Chloe’s capture so that he can see if he is worthy. Zechariah takes Chloe and attempts escape. Gary charges towards them, but Elder Brood grabs his leg to get him to focus on the battle. He kicks him and continues to pursue only for Elder Brood to stop him again. Elder Brood remarks that it is time for him to prove his worth and stops him from escaping. Gary says that he refuses to be his pawn. Elder Brood reveals that he wasn’t changed into a werewolf by choice, but by his worthiness. Seeing that Gary won’t stop pursuing, Elder Brood gives him 24 hours to prepare. Mecha-Maid heads to Gary’s position and asks he can find Zechariah. He reveals that the rain has drowned Zechariah’s scent. The duo head out not knowing that werewolves are watching him.

Later that morning, Capes, Inc is called by Damien Darkblood to battle the many Gorggs in the sea. They head to Pentagon, seeking Cecil’s aid in finding Chloe. Cecil says that he can’t find them and Mecha-Maid reveals that she knows Zechariah’s location now.

Zechariah pins her down on a stone slab. Zechariah reveals that with her drinking vampire blood, achieving vampire powers without the blood reliance. However, they were only temporary and he reveals that plans to drain all her blood before turning her into a vampire. Chloe asks him to get it over with and attempts to convince her to release her so that he can fight Gary. Zechariah refuses and she headbutts him.

Gary emerges from the teleporter with Agent Hunter and Mecha-Maid. Gary begins pummels him, but Zechariah coverts to mist form, giving him an illusion. Zechariah manages to decapicate Agent Hunter and separate his body so that he can’t reattach his head back. They are interrupted by the Elder Brood and his pack of werewolves. Elder Brood tells Gary that he will be tested now that his 24 hours are up.

Retrieved from "https://imagecomics.fandom.com/wiki/Astounding_Wolf-Man_Vol_1_24?oldid=46863"
Community content is available under CC-BY-SA unless otherwise noted.