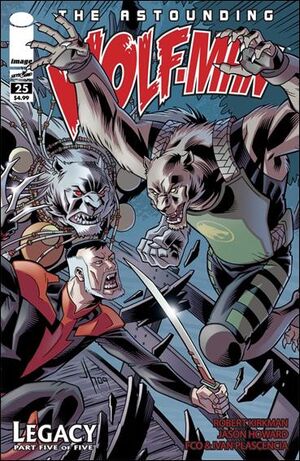 Chloe and Mecha-Maid stare in shock. Jacobson signals to the other werewolves not to interfere with the battle between Gary and Elder Brood. Gary asks that he stand aside and Zechariah asks that Gary put aside their difference temporary so they can kill the Elder Brood. An annoyed Elder Brood impales Zechariah, pulls out his heart, and eats it. The results causes Zechariah's skin to decay and he would become a pile of bones.

Meanwhile in the Pentagon, The Actioneers scream in agony after going a long period of time without blood. However, it is revealed that Zechariah’s death caused them to revert back to Humans. Donald tells Cecil to the good news while he takes his chemical bath.[1]

Elder Brood says that Gary’s friends are safe as long as they don’t interfere with the battle. Gary asks why he’s doing it and what is he worthy of. As the battle continues, Elder Brood reveals that Gary was chosen and that he was following him for years. He also reveals part of his origin as he became corrupted with power. Long ago, there were many Elder Broods and they ruled werewolves and humans alike.

However, he got greedy and slayed all the elders until he remained. Under his control, men grew to hate werewolves and they were hunted down until they went into hiding. Elder Brood would remain in hiding, shamed by his ambition until he came across Gary. He observed him when they were much younger. Seeing that was a good person by his charity, devotion to Rebecca, and his fearlessness. He would follow Gary to New York and learn that he was a man of power, making him unable to be corrupted by greed. From there, he decided to turn Gary into a werewolf.

The group reports to the Pentagon and Gary reveals that he is now their leader. Agent Hunter would have his head reattached with his parent glad that he’s okay. Gary reveals to Cecil his plans of reforming the werewolves into something good.

Mecha-Maid goes to see the Actioneers, glad to see that they aren’t vampires anymore. Cecil pulls Chloe over and shows her a sample of Zechariah’s blood. Chloe thanks her, as her powers were only temporary and it will sustain her for a while.

Gary goes to Cypress Hill Cemetry to visit Rebecca’s grave, wishing Rebecca was there with them. Chloe interrupts and tells him that people are waiting for them. Chloe and Gary arrive to Jacobson, who is excited to see him. Jacobson regrets obeying the Elder and the house is now a living quarters for the werewolves. Jacobson asks what their next move is and he says “everything” with happiness.

A few weeks later, Gary, Gray Wolf, and other werewolves prepare for a mission. He jump out and debuts the Wolf C.O.R.P.S. as crime fighting team. He commands them to attack the Gorggs.

Retrieved from "https://imagecomics.fandom.com/wiki/Astounding_Wolf-Man_Vol_1_25?oldid=67446"
Community content is available under CC-BY-SA unless otherwise noted.