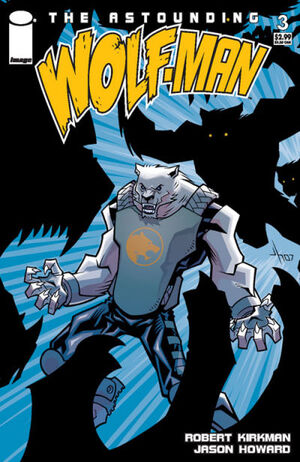 Appearing in "Well...The Good News is the Car's Done"

Plot Synopsis for "Well...The Good News is the Car's Done"

A stressed Gary Hampton contemplates what happened to Sergeant Superior[1] in his Wolf-Man Lair. Zechariah appears before him inside the Wolf-Car. He becomes angry and coverts to Wolf form. He demands to know where he has been for the past 2 weeks. Zechariah converts to mist form and easily escapes. He reveals that he knows about him killing Superior. He argues that this was a lesson for him to learn and he believes that this is the first time he has killed. Gary mentions that he has killed an old man before in his first full moon frenzy.[2] Zechariah recognizes that he made a mistake and asks that they move on from it. Zechariah reveals that he knows his information based on his long life span. He tells him not to worry about Superior as he hid the body so that the news wouldn’t.

Later that night, Gary shaves his stubble and discusses with his wife about his company, Hampton Industries. He reveals that the company meeting didn’t go well and Rebecca Hampton says that it will be alright.

The next night, Zechariah takes the wheel on the Wolf-Car and reveals from the police radio that a man named Thrill Kill has taken a person hostage. Zechariah presses the launch button in the car, revealing that it has a catapult large enough to fit a person. He finds Thrill-Kill asking that he let go of the hostage. He holds her by her leg and drops off the roof, believing that Gary would rescue her first than he let him go. He tackles Thrill-Kill, and he attempts to attack him. However, Gary grinds his head against the bricks and manages to catch the girl. He drops her off with her thanking him. Two police tell him to freeze and he manages to escape.

He goes to find Zechariah captured by werewolves. One of them mentioned that Gary is “Elder Brood.” He asks if he’s protecting Zechariah and he mentions he is. The werewolves begin attacking him. He manages to injure two of them as they have him too. Zechariah uses his mist form to escape. The werewolves leave with one to them stating, that they haven’t come to fight an Elder Brood. He asks Zechariah why they call him Elder Brood and he mentions that he doesn’t have time, as the night is almost over. He morphs into a bat and leaves.

The next morning, Gary informs Rebecca of how he was voted out of Hampton Industries since it’s a publicly traded company. He says that they must fire Maria, their maid, much to Rebecca’s shock. In the background lays a cameo appearance of Sergeant Superior being missing. Gary assures her that they will be okay since he had been given a severance package to live on. Dunford interrupts and reveals that people believe that Gary is using company money to pay for his house, causing tax evasion. He also reveals that they are here to evict them. Gary begins to panic.

Retrieved from "https://imagecomics.fandom.com/wiki/Astounding_Wolf-Man_Vol_1_3?oldid=42984"
Community content is available under CC-BY-SA unless otherwise noted.