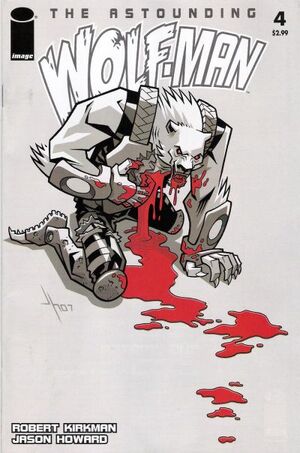 Rebecca takes Chloe Hampton to Wolf-Man’s Lair. However, she doesn’t know that the mall is really a ruse to disguise the true purpose of it as a base. She keeps asking and Rebecca takes her through the closet. She hits a button and Chloe watches in amazement as they descend to the lair. Gary greets her and asks that she don’t tell anyone about the secret facility. He shows her his Wolf form as she stares in fear. Dunford takes her to her room and Gary remarks that he’ll have to wait before he reveals Zechariah.

Later that night, Gary goes out on patrol with him. He uses his enhanced senses and smells danger, but is found by Jacobson and his werewolves. He manages to kill one of them by snapping his neck. Gary apologizes for killing him. Jacobson comments that his skills and strength are impressive, but he hasn’t reached his full potential. He asks why they are constantly calling him Elder Brood. Jacobson mentions that Zechariah is hiding information from him. He continue to pummel him and Jacobson impales him. He asks what has he done.

Zechariah arrives and asks for Gary to revert to human form. He does so and he reverts back after Zechariah’s suggestion. Jacobson reveals that he has killed his werewolf daughter so that he can sustain himself while he was on his frenzy. Zechariah argues that it wasn’t his fault and Jacobson reveals that he has been hunting Zechariah for years, citing that he needed Gary as an ally. Gary decapitates him in rage and Jacobson attempts to take his head back, but Gary prompts to dispose of him himself. After they leave, Zechariah coverts from mist form, revealing that he can survive being decapitated. He is weakened from the blood he lost and the duo head to leave.

Meanwhile, the Actioneers find a lawyer and interrogate him. They see the footage of Gary killing Sgt. Superior. Minotaur begins to cry and Code Blue stares in shock. Zechariah manages to get to his house in time. He pulls a book, revealing a secret chamber. He talks to a unconscious Superior, revealing that he is actually alive. He prepares to feed on him to crave his bloodlust.

Retrieved from "https://imagecomics.fandom.com/wiki/Astounding_Wolf-Man_Vol_1_4?oldid=42985"
Community content is available under CC-BY-SA unless otherwise noted.