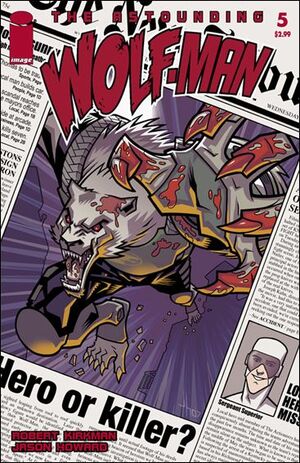 A couple of people in the New Tribune plan to put out a newspaper questioning Wolf-Man whether he is a hero or killer. They are interrupted by Eruptor who says that they slandered him by calling him, “Erector.” Gary soon follows suit and is blasted by him, though the blast has no effect on him. A reporter manages to take a picture of the action. He grabs his arm and throws Eruptor to next building, knocking him unconscious. He comes back to see the damage and a reporter asks for an interview. The next morning at Wolf-Man’s Lair, Rebecca takes notices of his great deed. Gary reveals that he retains some of his state of mind while in his full moon frenzy and has something to keep him restrained while the full moon. Chloe Hampton greets them and leaves with a depressed demeanor.

Meanwhile, Vault begins fighting the Actioneers. Kinetic uses her Telekinesis power on Vault and Mecha Maid. Mecha Maid programs Vault to walk to the nearest police station, calling his armor “low-tech.” The team watches in amusement as he does so. Mecha-Maid remarks that they say Wolf-Man on the news. Code Blue remarks that they should release the footage of Wolf-Man killing Superior.[1] Kinetic says no, stating that she wants kill him herself. Later that night, Gary meets with Zechariah and has him explain what “Elder Brood” means. He reveals that the Elder Brood are believed to be the first werewolves, making centuries or millennia old. He also reveals that Jacobson isn’t as powerful since he is descended too far from the Elders. He also reveals that the Elder Brood select those to given lycanthropy and Gary was given it directly.

They hear a noise and Gary rushes too it. Below is Construct after beating two Capes, Inc, Kid Thor and Red Devil. Gary ambushes Construct, but is easily tossed aside. Kid Thor wakes up and attacks Construct with his hammer and Gary removes Construct’s helmet. It is revealed that there was a woman inside and she surrenders immediately. Kid Thor gives Gary a card, suggesting that he join Capes. Gary returns to Zechariah and suggests hunting down the Elder who turned him. The full moon begins to rise and Gary heads home.

After being intimate, Gary talks to Rebecca about Chloe not adjusting to the changes. He worries as they are still investigating him for embezzlement. Gary gets out of bed and puts on his boxers, preparing to restrain himself during the full moon. Chloe hears a noise coming from the hallway and sees Gary in his Wolf-form, restrained to keep his frenzy in check. She sees in horror, crying as well as Rebecca.

Retrieved from "https://imagecomics.fandom.com/wiki/Astounding_Wolf-Man_Vol_1_5?oldid=42986"
Community content is available under CC-BY-SA unless otherwise noted.