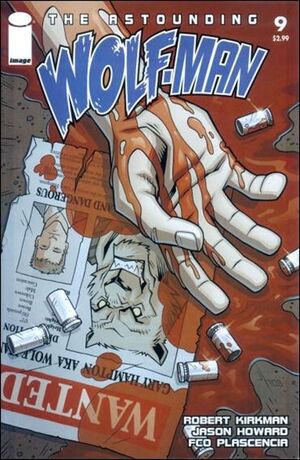 Chloe hires Damien Darkblood to find a person of interest for her. He says that it will be difficult, but sure he can accomplish the task. Dunford waits for her to go into the car and Chloe reminds him that it isn't his business for him to know.

Gary begins his training with Elder Brood. Elder Brood breaks a few trees and the duo perform a simultaneous strike on each other. Elder Brood commends Gary for laying a wound on him and says that he will continue to test him as he reaches his peak. He lives at a fast rate, leaving a confused Gary to think.

Meanwhile, Mecha-Maid uses her "daughter", Elise as a distraction for her to escape. Elise talks with Kinetic and she attempts to escape. Minotaur. Zechariah notes that they must watch her more often to prevent it from happening.

Agent Hunter finds Gary and attempts to arrest him. He runs and he fires his gun. He manages to wait out until the night so that he can transform. He strikes him, asking that leave as he proclaims his innocence. Hunter easily recovers from his attack and flips over Gary. He hits him with silver bullets, revealing his vulnerability to silver. Gary manages to catch him and cuts him in half. A terrified Gary apologizes and Hunter shoots him in the head, revealing that he survived the attack. He stretches his intestines and reattachs his legs to his torso, showcasing his great Regeneration ability. He dodges his strike again, showcasing his Superhuman Reflexes and Superhuman Agility. He fires more bullets into Gary and asks him to surrender. Elder Brood cuts him in half again and throws his half-cut torso so that he be too far from his body to regenerate. He asks Gary to come.

At the Hampton Estate, Chloe finishes bench pressing and Darkblood appears before her, much to her shock. This showcases that he was able to get past the estate's security and he tells her that he has found the person.

In Montana, Gary's shouts scare away two hunters while Elder Brood removes the silver bullets. Elder Brood reveals that the silver blocks his healing capabilities and Gary attempts to revert to human form. Elder Brood tells to to remain in his werewolf form as his healing ability that he has neglected. HE asks how he will achieve and Elder Brood states it is is the next part of his training. He impales him

Retrieved from "https://imagecomics.fandom.com/wiki/Astounding_Wolf-Man_Vol_1_9?oldid=42990"
Community content is available under CC-BY-SA unless otherwise noted.