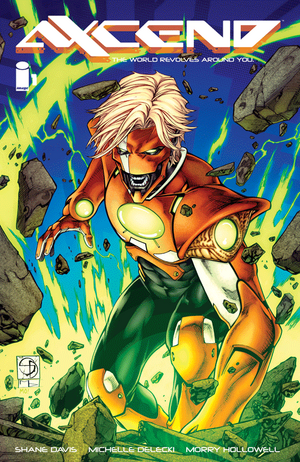 In a high school hallway, Eric Morn spots fellow senior Chip picking on an underclassman. He attempts to stick up for the boy and is beaten by Chip. Chip tells him he's soft, unlike how his twin brother Erin. Chip tells Eric it isn't right what happened to Erin and walks away.

Later, Eric returns home and his mom asks him if he's ready to go to the cemetery as it has been a year since Erin's death. Eric wears a hoody to cover his bruises from the fight and rushes to his room telling his mom he already went after school to get some 'alone time' in. He rushes to his room and turns on his video game 'Axcend'. He's offered a chance to be a beta tester in a new world. When he agrees, he's suddenly sucked into the television.

He is introduced to the other two beta testers, Rayne and Ruin. In this new world he's immersed in the game and actually moves as the player. He's then beaten in every game possible by the two more experienced beta testers.

The next day at school, Eric sits in class as his teach talks about the R.U.N. program, an old initiative that created seven-nuclear detecting satellites to protect against nuclear bomb threats. As a result, seven major countries could vote to use the system and global differences in religion and political tensions stopped. When he's called out in class about his knowledge about the global peace initiative, Eric tells them it seems more like global consequence. That the big 7 are just bullies. The teacher is unimpressed and gives him a poor grade.

Later, Eric visits a psychologist and tells him about a recurring dream he has. He tells him about a vision of someone reaching out to him. He then breaks down about the loss of his brother and how it's left a hole in his life. Doc Johnson asks if he's ever had thoughts of harming himself. Eric says he never would do that.

He leaves the doctors distracted. He looks at his handheld video game. He's struck by a bus while crossing the street. However, he has a vision of the person reaching out to him. He's respawned into the real world as the Axcend super-hero.

Superman Earth One co-creator SHANE DAVIS returns to comics for an all-new ONGOING SERIES! What happens when a video game decides to come to our reality to play? When there are no extra lives, and Armageddon looms on the horizon, when your life revolves around gaming like teenager Eric Morn, you Press Start. Writer/artist SHANE DAVIS (Superman: Earth One), MICHELLE DELECKI (JLA,Venom) and MORRY HOLLOWELL (Civil War, Old Man Logan) bring you an epic sci-fi/thriller that's like Tron meets Inception with a cheat code! This special introductory issue features 28 full pages and no ads! Each issue of the series will feature a VS. linking cover variant by DAVIS showcasing the book's cast.

Who is Eric Morn? Interview with the creator, Shane Davis

Retrieved from "https://imagecomics.fandom.com/wiki/Axcend_Vol_1_1?oldid=45546"
Community content is available under CC-BY-SA unless otherwise noted.