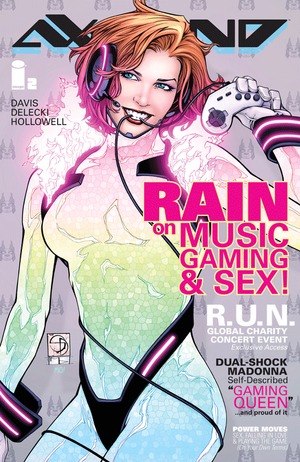 Later, she heads to her dressing room and her manager congratulates her on yet another amazing show. She asks if he's gotten anymore information on who created the game Axcend. She tells him she wants to buy the game outright. Here manager is still surprised that she'd be so interested in a game but hands her the Glow, G-Spot, drugs she requested.

Elsewhere, Eric Morn drives through the streets in a fast car, creating portals to escape from his police pursuers. He returns home to his other fancy cars and money and smiles at the idea of having video game powers in the real world.

That night, Rain gets high on drugs as her friends use her for the exposure and photo opportunities of hanging out with a big star. As she is returned to her hotel and is passed out on the floor, she thinks about how she must be number one. As she hallucinates, Dog communicates with her and tells her he needs to be pulled out of the game. Rain obliges and pulls him into the real world. Dog warns him that Betas are escaping into the real world.

The next day, Eric returns home and thinks about how he needs to get home before his mom does, and forge a note to explain why he missed school. However, two security guards wait for him at the doorway. Once he passes them an enters, he finds pop star Rain waiting for him. She is bubbly and excited to meet him. He's initially excited about the fame and that a girl is in his room. However, she quickly transforms into Rayne from the game and threatens him to transfer into his Beta state. When he does, she's surprised he is not Ruin and relaxes. She tells him about the break and that Ruin may not be mentally stable and must be found immediately.

The virtual world, Axcend, continues to spill out into reality. We follow fiery pop star, Rain, as she is the next player to activate. Rain and the mysterious A.I. DOG must enlist the help of gamer, Eric Morn, to get to Ruin before he activates into a catastrophic rampage. Can the trio reconcile their differences in time to save our world?

Retrieved from "https://imagecomics.fandom.com/wiki/Axcend_Vol_1_2?oldid=48109"
Community content is available under CC-BY-SA unless otherwise noted.