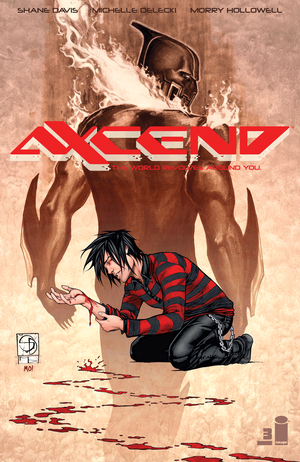 Just a square peg being beatin' over and over into a world full of round holes.

Ruiz is in his mortal form and trapped by several school bullies. They criticize him for being gay and physically beat and taunt him.

Elsewhere, Eric Morn, Rayne, and Dog attempt to track down Ruin before he becomes to powerful.

Ruiz returns home and is verbally abused by his father. He returns to his room and thinks about playing the game Axcend but it's been down for several days. He grabs his father's gun while he sleeps. When he heads to homecoming, he's immediately teased by his classmates. He pulls out the gun and frightens everyone. However, before he pulls the trigger, everyone has blank stares and repeats his name, "Ruin."

He returns home and kills his father with his new powers. He then heads to Washington, D.C. and kills the president.

Retrieved from "https://imagecomics.fandom.com/wiki/Axcend_Vol_1_3?oldid=53101"
Community content is available under CC-BY-SA unless otherwise noted.