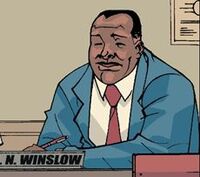 B.N. Winslow was the principal of Reginald Vel Johnson High School. After student Mark Grayson defended his locker neighbor Steve from a bully, he was sent to Winslow's office. Winslow commended him, but warned him that he wasn't "invincible" or anything. Unbeknownst to him, Mark had recently developed superpowers, and at that moment chose the superhero name Invincible.[1]