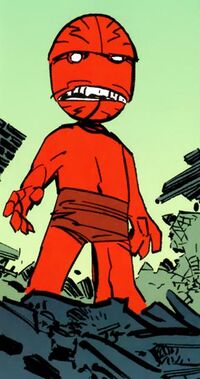 Ba-Goom was the leader of an alien world in Dimension-X, in order to prove his genius to his subjects he stated that he would have hunted and killed the famous Savage Dragon.

While on Earth an alternate reality version of Dragon slaughtered the entire population of his homeworld, forcing him to live with Dragon and his family at their house, where between an attempted murder and the other he befriended Dragon's daughter Angel. He eventually fell in love with her and turned her into his mistress.

Retrieved from "https://imagecomics.fandom.com/wiki/Ba-Goom?oldid=66377"
Community content is available under CC-BY-SA unless otherwise noted.