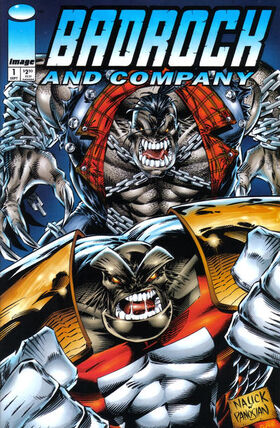 Two wealthy twin brothers make a bet setting Badrock and Pitt against each other.  One brother gets Badrock involved by telling him there is a child’s life at stake; the other brother finds Timmy Bracken, Pitt’s young companion, after school and mesmerizes him into coming along.  He takes Timmy to abandoned warehouse, and his brother brings Badrock.  Suddenly, Pitt bursts in and knocks Badrock through the wall.  Badrock regroups and attacks Pitt.  As the two brawl, the brothers up their wager.  Timmy overhears them consider killing him to goad Badrock and Pitt into a death match.  He tries to sneak away, but one of the brothers catches him and smacks him. Badrock and Pitt overhear and turn their attention to the brother.  The other brother tries to escape, but Badrock catches him.  Later, at Badrock Cafe, Badrock tells Timmy and his guardian that Youngblood has the two brothers in custody.  He gives Timmy an autographed t-shirt, and they say goodbye.