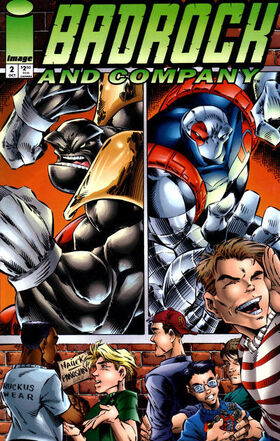 Appearing in "Acting on Impulse"

Plot Synopsis for "Acting on Impulse"

After breaking some training equipment again, Badrock agrees to do a pay-per-view wrestling match with Stormwatch member Fuji for charity.  Fuji is initially uninterested but changes his mind after recalling his sumo wrestling career.  Superheroes around the country take note of the event while Badrock and Fuji train. Media magnate Grant Garner is overseeing the construction of a special arena for the match when he is approached by a woman named Impulse.  Later, she meets with New York mobster Tony Twist and offers to ensure Fuji kills Badrock by using her power to manipulate human pheromones.  The night of the event, members of Stormwatch and Youngblood arrive as Fuji and Badrock enter the arena.  Spectators around the world watch via television as the two wrestle. Impulse uses her powers to heighten their aggression, and the match turns into a destructive brawl.  The fight spills out onto a nearby dock and into the water.  Badrock breaches Fuji’s containment suit and almost drowns.  Stormwatch and Youngblood arrive and work together to rescue their teammates. Cougar recognizes Impulse, saying her name as she slips away.  After Riptide resuscitates Badrock, he and Fuji both comment that something made them lose control.  Meanwhile, an outraged Tony Twist orders Overtkill to kill Badrock.