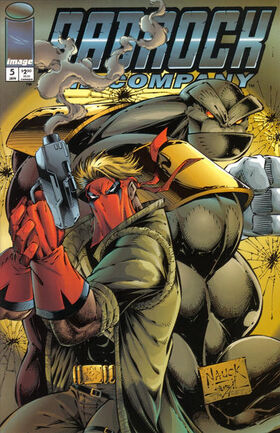 Badrock and Grifter parachute into a Saudi Arabian desert and fight their way past armed troops.  To keep their presence secret, Grifter wants to kill the troops, but Badrock instead traps them in a tank and throws it into a nearby body of water.  The two then steal a jeep and head toward Mecca.  On the way, Badrock recalls discovering his mother had been kidnapped by the Covenant of the Sword in order to force his father to work for them.  To rescue her, Graves told Badrock to find Grifter.  For days, Badrock rousted criminals for information, but Grifted soon found him.  Upon learning it was Angela McCall who was kidnapped, Grifter agreed to help.  Disguised as locals, he and Badrock infiltrate a secret Covenant base in Mecca. Grifter remembers proposing marriage to Angela long ago, but she turned him down and broke up with him.  He and Badrock fight through the Covenant’s operatives, and Grifter rescues Angela.  After she reunites with Badrock, Grifter starts to walk away, but she recognizes him and gives him a hug.