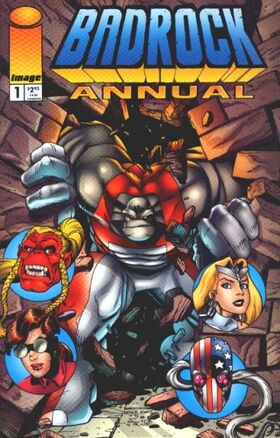 The flying villain Re-Coil grapples with Badrock in mid-air until they crash to the ground south of Chicago.  Freak Force hears of their impact on their police scanner and moves to intervene, hoping to claim the bounty on Re-Coil.  Upon arriving, Barbaric knocks out Re-Coil and loads him for transport while Badrock flirts with Ricochet.  Jealous, Barbaric argues with Badrock over which of them deserves credit for busting Re-Coil. The dispute soon escalates into a macho competition to prove who is stronger.  They go to a derelict neighborhood, demolish a building, and get into a fist fight. They only stop after Barbaric smashes a car over Badrock’s head, and they realize the car owner will be angry. A baby cries out, and they follow the noise to a group of squatters hiding in a building.  One of the squatters’ guards, Fever, uses her power to manipulate emotions to cause Barbaric and Badrock to fight again.  Her colleague Altasonic then uses his superhuman sonic scream to blast them into the street.  At Freak Force headquarters, Dart has collected the bounty on Re-Coil when Rapture alerts her to TV news covering Badrock and Barbaric’s fight.  Mighty Man, Ricochet, and SuperPatriot intervene to stop them while Dart and Rapture find the squatters and learn they are the victims of human trafficking.  Fever manipulates the team’s emotions until Ricochet knocks her out.  Freak Force then takes down Altasonic and the blade-wielding Cleave.  Fearing deportation, the squatters plead with Dart not to contact the police.  Badrock and Barbaric admit they were fighting over Ricochet, and she chews them out for it.  Later, at Youngblood headquarters, Shaft chastises Badrock for his actions and then, to Dart’s chagrin, bills Freak Force for part of the damages.