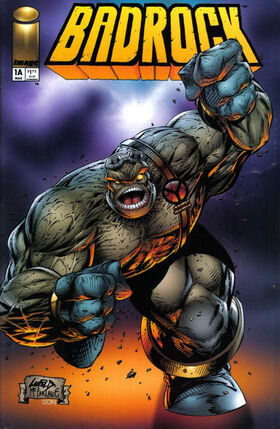 Badrock and Bloodpool member Gunner are atop a skyscraper in Chicago to rescue his father from the Vicious Circle and the assassin Girth.  Badrock exchanges blows with Girth, grabs Gunner and his dad, and jumps off the building.  Upon landing, Chicago native Gunner leads them toward an L-train.  They fend off an attack by Lowblow and board the train only to be met by Cutthroat and Hellrazor.  One wounds Gunner, but she and Badrock swiftly defeat them.  Gunner, Badrock, and his father flee into the streets, and Badrock remembers how this caper began.  He returned home from the grocery store to find his home in ruins and his dad missing.  A hologram of Girth told him his father had been taken by Overlord and challenged him to come to the rescue.  In the present, Badrock and company enter an alley and find the Savage Dragon waiting for them.