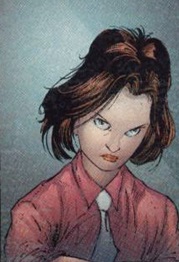 Barbara Rodriguez was born in Centralia, Pennsylvania. She grew up in a life where if something wasn't right, you make it right and her parents stayed behind even though it continually burns to the ground.[1]

As an adult Barbara joined the Federal Bureau of Investigation. She entered the Internal Affairs department and received orders to investigate Sam Burke and Twitch Williams. She posed as a civilian and recorded Twitch telling her police business. She asked him to see her in her office about breaking police code.[2]

Soon, Sam and Twitch found themselves in even deeper trouble with Barbara as she brought Sam in when his bullet was found in his shift captain's forehead.[3] After pushing, Sam discovered she is working with Feds and her room was bugged. Sam strong armed her to cooperate as they had information she needed.[4] Suddenly, the lights went out and the building was being attacked by Udaku. Sam and Twitch saved Barbara by killing Cecilia, the leader of the group.[5]