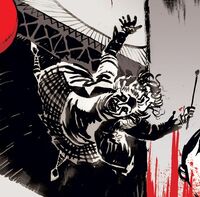 Barbara Salinger was a suicidal schizophrenic that was released from a U.S. mental health facility when Reagan cut funding. She landed on and murdered Mr and Mrs Arguello. Marcus Arguello blamed Reagan for the series of events.[1]