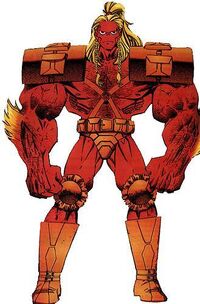 Nuclear waste was illegally dumped on reservation land. Barney's tribe suffered from the contamination of the water supply. While his family and friends died, Barney was mutated into a large form.

He was adopted by the Root family; unfortunately tension about "freaks" forced him to leave. As a runaway, he befriended Ricochet. The two were captured for theft and sent to the Mutate Manpower Management Service, where they eventually escaped.

In Chicago, Barney was a member of Freak Force. He later was invited to join SOS. During his tour of duty, he married Ricochet and the two had a child.