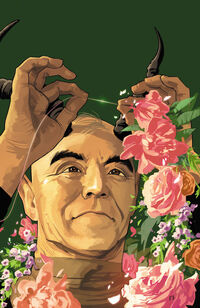 Barr was born on Wreath, which has been at war with Landfall for decades. He is the level-headed member between him and his wife Klara.

Many years ago, Barr raised Marko, his son, in a time when the great war had been outsourced to other planets. They took him to the war-torn and blood-stained soils where the last great Wreath battle took place. Via a spectral recreation, Marko was able to experience the battle as if he was there. From that day forward Marko learned to hate the people of Landfall.[1]

While he preferred peace, Barr found he was forced to use violence to teach his son a lesson at time. When Marko harmed a neighbors eight year old girl, he took of his belt and beat Marko for harming another person.[2]

Years later when Marko was an adult, Barr and Klara sensed Marko may be in trouble. They gave him a family heirloom sword and had sensed it had been broken. They had sold their house in order to purchase two Crash Helms. They used these to teleported aboard his rocketship and check in on their son. When they found him with a ghost and Landfall soldier, Izabel and Alana, they attacked to defend their son. Klara used a Banishment spell on Izabel forcing her to a nearby planet. Marko quickly jumped in the way and showed them his child and informed them it was his wife and kid.[3]

Marko grabbed one of their Crash Helms to teleport to the nearby planet to save Izabel. Klara went with him while Barr stayed behind with Alana. The two bonded as he helped take care of his grandchild and revealed that he had only a few months left to live. He created bulletproof armor for her and claimed he only wanted to help his loved ones with his time left.[4]

When Marko and Klara returned to the ship with Izabel, they attempt to take off but are pulled back towards the Timesuck. Marko throws the Crash Helms into the furnace to force the ship to fly faster. However, it is being pushed faster than it was designed to go and begins to break apart. Barr began to hold the ship together with a binding magic spell. However, it pushes his luck too far and he soon dies of heart failure. His family grieved for weeks at his loss on the rest of their journey to Quietus.[5]