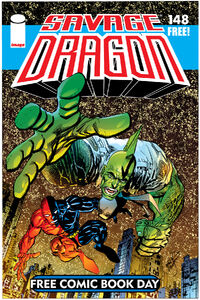 Daredevil was a hero in the 1940s. He was captured at some point by Solar Man, along with many other heroes of that era, and used to fuel Solar Man's powers. Daredevil and the other heroes were released in 2008, draining Solar Man's power and enabling Savage Dragon to defeat him. Later, Daredevil and the other superheroes formerly imprisoned by Solar Man were relocated to different cities by the US government. Daredevil is relocated to Chicago where he helps Savage Dragon to take out some thugs. After a brief conversation, the two heroes set out to find Savage Dragon's kidnapped children with the help of the Little Wise Guys, Daredevil's sidekicks. With their help, Devil and Dragon find the children and discover their kidnapper is none other than the children's former babysitter.

Daredevil is based on the original Daredevil character published by Lev Gleason Publications during the Golden Age. The original character debuted in Silver Streak Comics #6 (September 1940). He was partially revamped the next issue and given his famous red and blue costume.

Retrieved from "https://imagecomics.fandom.com/wiki/Bart_Hill?oldid=66413"
Community content is available under CC-BY-SA unless otherwise noted.