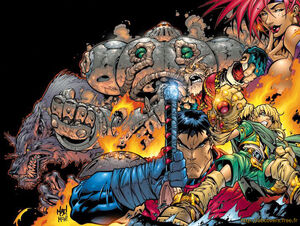 Battle Chasers is an American fantasy comic book series by Joe Madureira, launched in April 1998. It was one of the most popular comics in the late 1990s, but suffered from extreme lateness, with an average of about 6 months between issues, including a delay of 16 months for issue 7.

Originally published by Wildstorm under its Cliffhanger imprint (founded by Madureira with J. Scott Campbell and Humberto Ramos), the series moved to Image Comics in 2001.

The last issue, #9, was published in September 2001 and had a cliffhanger-ending that never was concluded, as #10 (scheduled for November 2001) was never released and Joe Madureira left the comic industry to pursue a career as a video game designer.

Battle Chasers was one of the initial three comic book series published under the Cliffhanger label, which Madureira founded with fellow artists J. Scott Campbell (Danger Girl) and Humberto Ramos (Crimson) for Jim Lee's Image Comics imprint, Wildstorm. When, effective in 1999, Wildstorm was sold to DC Comics, the Cliffhanger titles moved along, and issues 5 through 8 of Battle Chasers were published by DC, until Madureira left the publisher, and released Battle Chasers #9 back at Image Comics (where the series was supposed to be published from thereon).

When it was announced in August 2005 that Madureira would return to the comic industry, working on a then-unspecified project with Jeph Loeb for Marvel Comics (which was later revealed to be The Ultimates 3), he also stated that a conclusion to Battle Chasers is "one of those things that I think about every once in a while, and not having finished it bums me out... I would love to do it at some point, but it would be very far out." [1]

Retrieved from "https://imagecomics.fandom.com/wiki/Battle_Chasers?oldid=23413"
Community content is available under CC-BY-SA unless otherwise noted.