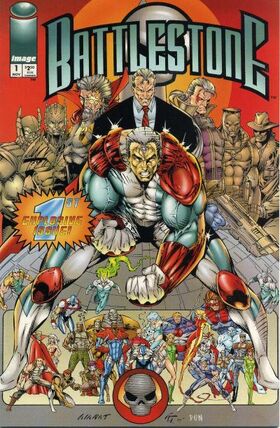 Years ago in the sewers beneath Philadelphia, Battlestone led Chapel, Duke, Dutch, and Al Simmons on a covert mission for Jason Wynn to root out Cybernet.  Leaving the wounded Duke and Simmons behind, the team found and eliminated a Cybernet squad.  Afterward, they chased one operative who escaped into the subway tunnels and got themselves lost.  Then, Dutch proved to be a traitor and shot Stone.  In the present, he is in the custody of Project:  Born Again, reliving his memories as the project scientists erase them to gain control of his mind.  Next, Stone recalls training on a farm with a man named Cartwright.  Then, he remembers fighting the Baron with the Allies during World War II.  But, Diehard kicked him off the team when his actions in battle accidentally led to SuperPatriot being injured.  Finally, Stone flashes back to squabbling with his brother, Cabbot, when they were children. To his mother’s horror, their father encouraged it believing such conflict made them stronger.  Now, Battlestone awakens, and the Born Again scientists declare him ready to the satisfaction of Alexander Graves.