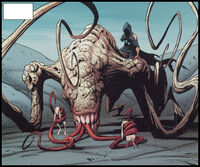 The Beast was given to Ezra Orion by the three Horsemen, Famine, War and Conquest and was warned about the dangers of working with it. However, he was holding it when the Beast was shot by Bel Solomon and it bonded to Ezra's right arm and began to grow.

Later, Buer bit off Ezra from his arm and tossed him aside, no longer needing the man as sustenance but keeping the right arm as it was now a part of him.

It is unknown is Buer is sentient or not as he doesn't speak or communicate in any way at all.

Retrieved from "https://imagecomics.fandom.com/wiki/Beast_(East_of_West)?oldid=61754"
Community content is available under CC-BY-SA unless otherwise noted.