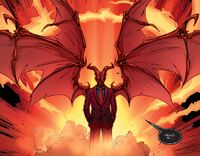 Belial is the Dark Angel of Fear. His hubris takes a hold and he has developed a god-complex.

Belial originally was one of God's top Angels and was expected to obtain a leadership role. His hubris got to him and God punished him. In retaliation, he changed sides to fight for Hell instead.[1]

When Bernard Simmons passed away, Albert Simmons came to his rescue to bring him to where he could be judged. He feared that evil forces would take him as leverage the same way they did with Wanda Blake.[1] During the escort, Belial appeared and attacked Spawn. He told Bernard he had great plans for him, but they will be coming soon. He eventually let him go and ran when Spawn pulled out his Sword of the Spirit. He cursed Spawn for letting God get involved as that was breaking code.[2]

Retrieved from "https://imagecomics.fandom.com/wiki/Belial?oldid=49591"
Community content is available under CC-BY-SA unless otherwise noted.