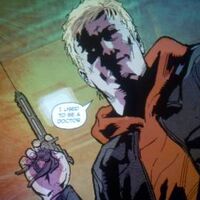 Formerly a surgeon with a comfortable life, Dr. Dane lets drugs get the best of him and they ultimately cost him both his family and career. The life changing event that ultimately brings about these unfortunate consequences takes place one weekend while he is on call. The only problem is that he is high on unspecified drugs at the time. After awakening from the drug induced haze he goes in to work to help operate on a female accident victim who had been grievously injured in a collision with a rig. Due to bleeding caused by his drug use, Dane is unable to aptly assist in saving her life and she dies on the operating table. He collapses outside of the operating room. Two months after this event, he attends his own medical hearing while, once again, high on drugs. After asking his lawyer to "just do his job," the two argue about how the situation can best be salvaged. The lawyer's opinion is grim. He tells the doctor that at best, he'll be fired, lose his license, and be the subject of a wrongful death suit.

Some time after this, he is approached in his apartment, by two shady men who forcefully recruit him to save the life of a woman who is a complete stranger to him. [1]