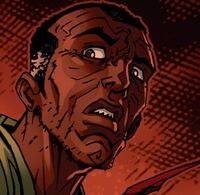 Bernard Simmons lost his battle with cancer and passed away at Staten Island University Hospital. Upon standing up, he was approached by Albert Simmons and told to follow him to the judgement point. He was warned demons would use him as leverage against Al and Belial soon attacked them. Bernard attempted to apologize to Al for never being there and being a bad father, Al told him it was too late and pretended not to care as he lead him to safety. As Bernard left, he knew his son cared as he wouldn't have been there otherwise as he stepped into the light to be judged for Heaven and Hell.[1]