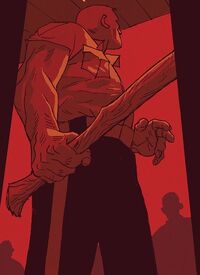 Get back in the damn house.

Bertrand Tubb was the Sheriff of Craw County. He stood up against a mob and dies when he was outnumbered.

He was buried on his property along with the bat he used to defend himself. The bat eventually grew into a full sized tree that was as stubborn as he was.[1]

Retrieved from "https://imagecomics.fandom.com/wiki/Bertrand_Tubb_(Southern_Bastards)?oldid=35526"
Community content is available under CC-BY-SA unless otherwise noted.