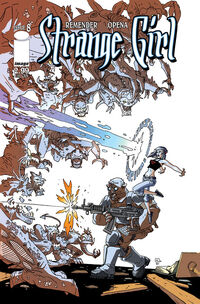 Bethany Black (aka Strange Girl) is the black sheep of her deeply religious family. While her mother, father, and brother sit down to study the Bible, she is off skating, smoking, and doing other things her family considers wicked. One day, while being chastised for her behavior, the rapture occurs. Her pious family, along with all of the other righteous humans, ascends to Heaven, while everyone else is left behind on Earth. God sends a message that he will now forsake Earth, and Satan and his demons rise from Hell to take over the planet. Ten years later, Bethany is working for the demon Lord Belial. She works for him in a bar and serves as a pet. She in turn has a pet demon named Bloato. Bloato is a "half-breed" demon, meaning that his mother and father are of two different species of demon. Earth has become Hell, with demons, giant insects, and fire reigning. Humans exist as slaves, used for labor and sex. In her years in Belial's servitude, Bethany has begun learning magic, and often uses protect spells to shield herself from the violent demons. One day, Bethany gets fed up and incurs Belial's wrath. While trying to escape her enraged master, Bloato tells her about the one remaining gate to Heaven, and that if Bethany can get to it, she may be able to sneak into Heaven. The gate is located in Vatican City.

Bethany is sarcastic, but is also a good person. She became an atheist because she believed in logic as opposed to faith, a dilemma which she discusses with Bloato. Despite her strained relationship with her family, she misses them very much and wants to see them after reaching the gate.

Retrieved from "https://imagecomics.fandom.com/wiki/Bethany_Black?oldid=62601"
Community content is available under CC-BY-SA unless otherwise noted.