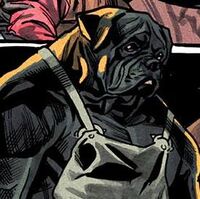 Bhord was a simple blacksmith that resided in Keneil. When the 'Great Champion' decided to help the stranded wizards and citizens of the fallen city of Keneil, he expressed his doubts of the stranger's title as Great Champion. He attempted to intimate the human, but back down when the human threaten to kill.

When the bison tribes launched a full frontal assault on the ruins of Keneil, he was one of the few to stand alongside the Great Champion.

Retrieved from "https://imagecomics.fandom.com/wiki/Bhord_(The_Autumnlands)?oldid=55722"
Community content is available under CC-BY-SA unless otherwise noted.