This is Bi-Plane from the comics. For the TV show character, see Bi-Plane (TV). 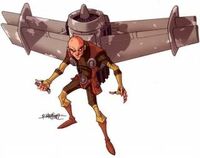 You may think of Bi-Plane as a silly villain now, Immortal... but soon you'll see the damage I can do.

Bi-Plane was the winged menace of Denver back in the day. He robbed many banks with his flying contraption. Later, Bi-Plane learned that he had contracted cancer. He laces himself with uranium and prepares to blow himself up, making Denver radioactive. The Immortal arrives on the scene and throws him into space, killing him instantly. Bi-Plane is later seen as a corpse in space when Invincible meets Allen the Alien after Omni-Man's betrayal.

Retrieved from "https://imagecomics.fandom.com/wiki/Bi-Plane?oldid=72985"
Community content is available under CC-BY-SA unless otherwise noted.